Batangas, officially known as the Province of Batangas is located in the CALABARZON Region in Luzon. Its capital is the city of Batangas. It is flanked on the north by Cavite, on the south by the Verde Island Passage wihich separated the province from the northern tip of the island of Mindoro.

The climate in this province is that the province belongs to the tropical savanna climate, with well-defined dry and wet seasons. Parts of Batangas lying to the east have unpronounced dry and wet seasons, influenced by the monsoon. Batangas City, the provincial capital, belongs to the tropical savanna climate, but is strongly influenced by the bordering monsoon climate, characterized by short dry seasons and longer wet seasons. Typhoons are a periodic occurrence especially during the southwest monsoon (habagat).

The months from January to May are ideal times to visit as these are still within the country’s dry season. Expect clear skies and sunshine most days. 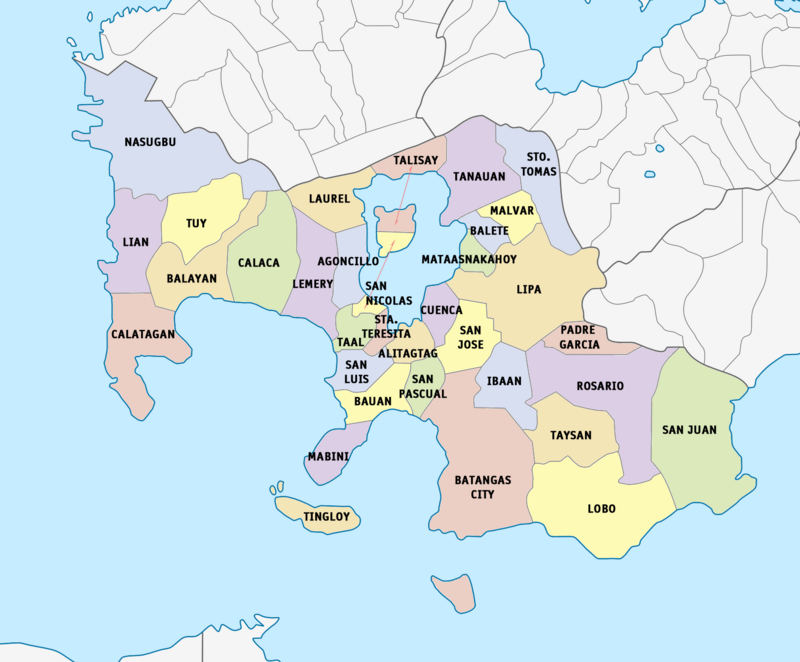 The Batangas province is divided into 30 Municipalities, 4 Cities:

There are 5 islands in Batangas:

The following is a list of points of interest relating to the Batangas province:

If you plan to visit the province of Batangas, you can use the following sites to determine the best places to stay:

The following is a list of festivals celebrated in Batangas throughout the year:

The following are the most frequently asked questions about the Batangas province.

Where in the Philippines is Batangas located?
Batangas is located on the southwestern part of Luzon.

Is Batangas a city or province?
Batangas is a province.

What is Batangas famous for?
Batangas is famous for Balisong (butterfly knife) and kapeng barako (coffee).

What does Batangas mean?
Batangas was derived from the root word “batang” which is a local term for logs in the river.

How Safe is Traveling in Batangas?
Batangas is very safe for locals and tourists.