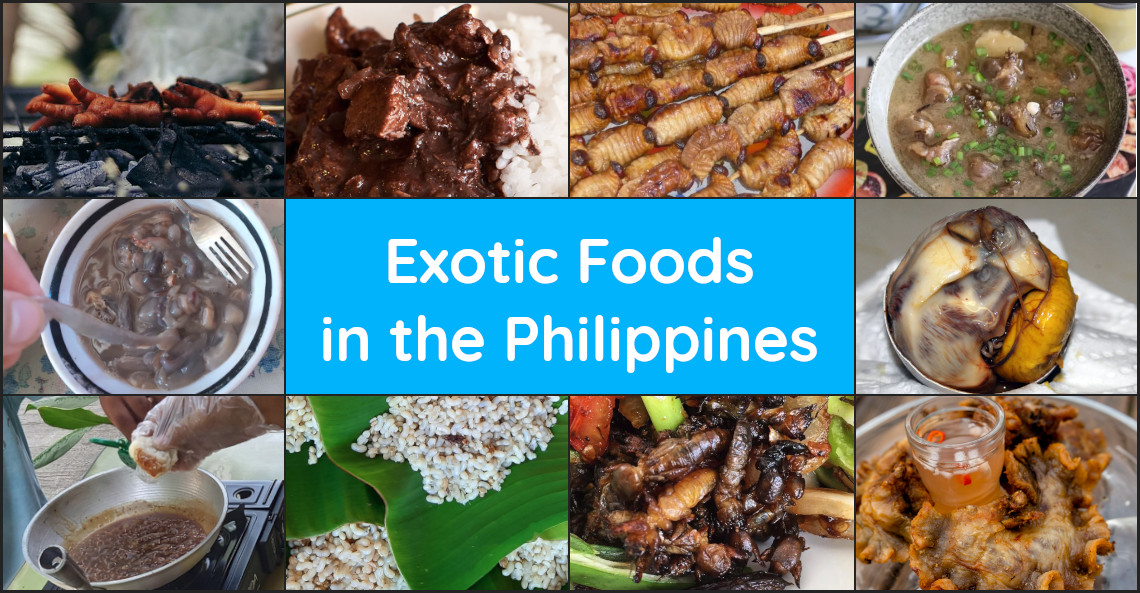 The Philippines has a long list of exotic dishes that only those with the most adventurous palate dare to try.  From the world-famous balut to isaw, getting a taste of these exotic foods is surely an entirely different experience when in the Philippines.

Balut is not for the faint of heart.  It is a boiled duck fetus ranging from 14 to 21 days old and is eaten from the shell.  It is sprinkled with a little bit of salt or dip into a mixture of chili, garlic, and vinegar before eating.  It is commonly peddled in the streets or served in Filipino restaurants.  Balut is known for its nutritional value which is high in protein and calcium.

Known as woodworm, tamilok is actually a mollusk feasting on mangroves and woods immersed in sea water.  It is typically eaten raw but marinated in vinegar, chopped chili peppers, and onions, just like ceviche.  It has a quite slimy texture and tastes almost the same as oysters.  Tamilok is popularly found in Palawan and is sold in popular tourist attractions such as Baker’s Hill.  Restaurants also serve deep-fried and breaded tamilok.

Soup Number Five, also spelled Soup No.5 or Soup #5 is an exotic dish made from a bull’s sex organs, particularly the penis and the testes.  It is usually eaten with ice cold beer or other drinks and also to cure hangovers.  Soup Number Five is known to be an aphrodisiac.

In Cebu, the dish is called lansiao, derived from lanciao, Hokkien term for male’s genitals.

Chicharon bulaklak is made of pig intestines that have been deep fried until crispy.  The fried intestines look like flowers, which is “bulaklak” in Filipino, hence the name.  It is often eaten as an appetizer and dipped into a mixture of vinegar and chili before eating.

If pig intestines aren’t enough, try tuslob-buwa which basically consists of pig brain, soy sauce, and oil.  Often served with pusô or hanging rice, tuslob buwa is eaten as a dip.  It originated from Cebu City and the term literally translates to “dip in bubbles”.

Kamaru are mole crickets thriving in rice fields and feeding on rice grains and leaves, hence also called rice crickets.  They can be stir-fried or cooked adobo-style and best partnered with ice cold beer.  Kamaru is a good source of proteins and B vitamins.

Sometimes referred to as the local caviar, abuos refers to the eggs of weaver ants sauteed with garlic, onions, and tomatoes.  Its texture is a combination of chewy and crunchy.  The dish originated from Ilocos and is common during the dry season.

Uok is a beetle larva while salagubang is a beetle.  Uok is found in rotting wood, particularly coconut trees.  They are typically grilled or made into adobo.  Both are crunchy on the outside and chewy on the inside.

Derived from the root word dugo which means blood in Filipino, dinuguan is a dish made of bite-sized pork offal (lungs, kidneys, intestines, ears, heart, snout) and meat cooked in a mixture of pig’s blood, garlic, vinegar, and chili.  One version contains chopped squash and another version contains chopped jackfruit.  There are also versions which use chicken or goat offal instead of pork.  Dinuguan is commonly eaten with steamed rice or puto (steamed rice cake) and is available not only in big restaurants but in small eateries as well.

Adidas refers to chicken feet, betamax is dried chicken blood shaped into cubes, isaw is chicken intestines, while gizzard is the chicken’s gastric mill.  These four are typically boiled, skewered, grilled over charcoal, and basted with a mixture of cooking oil, ketchup, soy sauce, and colored with annatto seeds.

They are popular street foods and are eaten as snacks, with rice, or with a bottle of ice cold beer.

These foods may look weird and unappealing but they wouldn’t have become popular if they didn’t taste good, or at least tolerable.  Try these exotic foods when in the Philippines for that truly authentic experience.