The Philippines lay claim to about 7,641 islands in the Philippine archipelago.  Only about 2,000 islands are inhabited and over 5,000 are still unnamed.

The collection of islands is located in Southeast Asia, between the South China Sea and the Pacific Ocean, was named after King Philip II of Spain.

The Philippines 7,641 islands stretch 1,839 kilometers from the northernmost tip of Batanes to the southernmost island of Tawi-Tawi. Bordered by the South China Sea to the west and the Pacific Ocean to the east.  The archipelago has its biggest island, Luzon, followed by Mindanao in the south. The Visayan islands in between are largely interspersed by small bodies of water. An irregular coastline of 334,539 km is dotted with many fine beaches, coves, and natural harbors.

Located off the southeast coast of Asia, the Philippines’ capital, Manila, is a mere hour-and-a-half away by plane from Hong Kong, 3.5 hours or less from most SouthEast Asian countries, 3.5 hours from Guam, and about 16 hours from the United States and Canada.

The following is an online map of the Philippines. Click the map to Zoom In or Zoom Out to view islands, cities, landscapes, beaches, etc.

The warmth and natural hospitality of the nations’ 100+ million Filipinos is known throughout the world.  The 111 cultural, linguistic, and racial groups endow the Filipino people with varying customs and traditions, marked by Chinese, American, and Spanish overtones.  In spite of their diversity, Filipinos have basically two dominant traits: a love of family and a strong religious faith.

READ MORE:  Faces of the Philippines

The type of government in the Philippines is a republic form of government with three equal branches: the Executive, Legislative, and Judiciary.

Manila  (Population is approximately 1.6 Million or 24 Million for Metro Manila)

The Philippines has three major island groups: Luzon, the largest island where the capital is located; Visayas, known for its fine beaches and idyllic coves; and Mindanao, where exotic forests make it an irresistible haven for nature lovers.

READ MORE:  How the Philippines Is Organized

The dry, hot season runs from March to May and the wet, typhoon season from June to October. November to February is generally cool with fair weather. Average daytime temperature, aside from mountain areas, is 22 ℃ to 32 ℃ with humidity at 77%.

READ MORE: Climate of the Philippines: Everything You Need to Know

The total population of the Republic of the Philippines is estimated at approximately 110 million people.

The national language is Filipino although there are at least 187 regional dialects. English, widely spoken and understood, is the language used for most business and legal transactions.

READ MORE:  Languages of the Philippines

At least 80 percent of Filipinos belong to the Roman Catholic faith, where many practices and beliefs are rooted. About 15% is Muslim, and these people can be found basically in Mindanao. The rest of the population is made up mostly of smaller Christian denominations and Buddhists.

Ferdinand Magellan first landed in the Philippines in 1521. The name Philippines comes from Philip II who was the king of Spain during the 16th century when the country became a Spanish colony.

The Philippines was granted to the United States in 1898 following the Spanish-American War. In 1935 the Philippines became self-governing, but their independence was delayed by World War II and the invasion of Japanese troops.

The islands were liberated by U.S. forces in 1944-45, and the Republic of the Philippines was proclaimed in 1946, with a government patterned on that of the United States.

In 1965 Ferdinand Marcos was elected president. He declared martial law in 1972, which lasted until 1981. After 20 years of rule, Marcos was driven from power in 1986. Corazon Aquino became president and instituted a period of democratic rule in the country.

READ MORE:  History of the Philippines 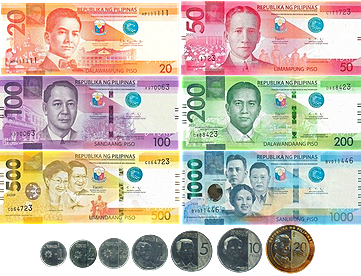 READ MORE:  Money in the Philippines: Everything You Need to Know

The wildlife of the Philippines includes a significant number of endemic plant and animal species. The country’s surrounding waters reportedly have the highest level of marine biodiversity in the world. The Philippines is considered as one of the seventeen megadiverse countries as well as a global biodiversity hotspot.

The islands are home to many species of flowering plants and ferns, including hundreds of species of orchids. Tall grasses have replaced the forests, which have disappeared due to logging, mining, and development.

The Philippines are inhabited by more than 200 species of mammals, including monkeys, squirrels, lemurs, mice, pangolins, chevrotains, mongooses, civet cats, and red and brown deer, among others.

The binturong, or Asian bear cat, was once prominent, but now this furry mammal is vulnerable. The tamaraw, a species of small water buffalo found only on Mindoro, is critically endangered.

Hundreds of species of birds live in the Philippines, either for all or part of the year, including peacocks, pheasants, doves, parrots, kingfishers, sunbirds, tailorbirds, weaverbirds, and hornbills. The endangered Philippine eagle, which eats monkeys, is barely surviving deforestation.