Since the introduction of Roman Catholicism to Filipinos in 1521, several Catholic churches have been established all over the country.  It’s no wonder that the oldest church structures found in the Philippines belong to the faith.

During their establishment, these churches were initially made of light materials such as nipa, bamboo, and wood which were damaged easily especially during the war and raids, earthquake, fire, and other natural calamities.  They’ve been rebuilt or repaired over and over again to strengthen the structure and accommodate the growing population of Roman Catholic devotees.

The oldest churches in the Philippines are hundreds of years old and considered some of the most beautiful and interesting architecture even up to this day.

Take a look at the oldest church structures in the country. While the church was founded in 1571, the present church structure was constructed from 1586 to 1607 using hewn adobe stones from the provinces of Bulacan and Rizal.  Located inside the historic walled city of Intramuros, the church is recognized as the oldest stone church in the Philippines and is a UNESCO World Heritage Site.

It is of Baroque style and has remarkable features such as ornate interiors and vaulted ceilings with splendid paintings in the trompe l’oeil.  The interior is also adorned with mouldings and carvings, and houses a grand pipe organ, 16th-century crucifix, molave choir seats, and chandeliers from Paris.

The grand appearance of the church makes it in demand for weddings, photoshoots, and tours. Other names: Parish Church of Immaculate Conception of Quipayo

The church was established in 1578 but the structure was erected in 1616.  It is made of ladrillo or brick and has withstood the test of time and become the symbol of the enduring faith to Catholicism in the region.  Artefacts excavated at the site of the church are displayed in the museum behind the altar.

The church was declared a National Historical Landmark in 1978. Majayjay Church was founded in 1571 and was recognized as the site of early Catholicism in Laguna.  The first church, which was made of nipa and bamboo, was destroyed by fire and the succeeding churches were also made of light materials until the construction of the stone church started in 1616.  The church is of Romanesque architecture and has a three-level facade, each level with arched windows.  The huge main door is made of wood and the floor is tiled with azulejo, a painted tin-glazed ceramic tile.  The bell tower, which is taller than the facade, has five storeys.  Inside the church are a retablo mayor and four other minor retablos, antique images of saints, and other centuries-old objects.

The church survived a fire, typhoon, and war but was repaired and rehabilitated to what it is today.  It was declared as a National Cultural Treasure by the National Museum in 2001. In 1583, the church was founded and built using cogon and nipa.  It was destroyed by fire and another church was built only to be destroyed by another fire more than 30 years later.  The present structure was constructed from 1670 to 1673 using adobe, similar to other churches in the Philippines built during that time.

The overall design of the church is simple.  Its bell tower houses the Baptistery where the image of St. Mary Magdalene in a small retablo is found.  The church was declared a National Historical Landmark in 1977. 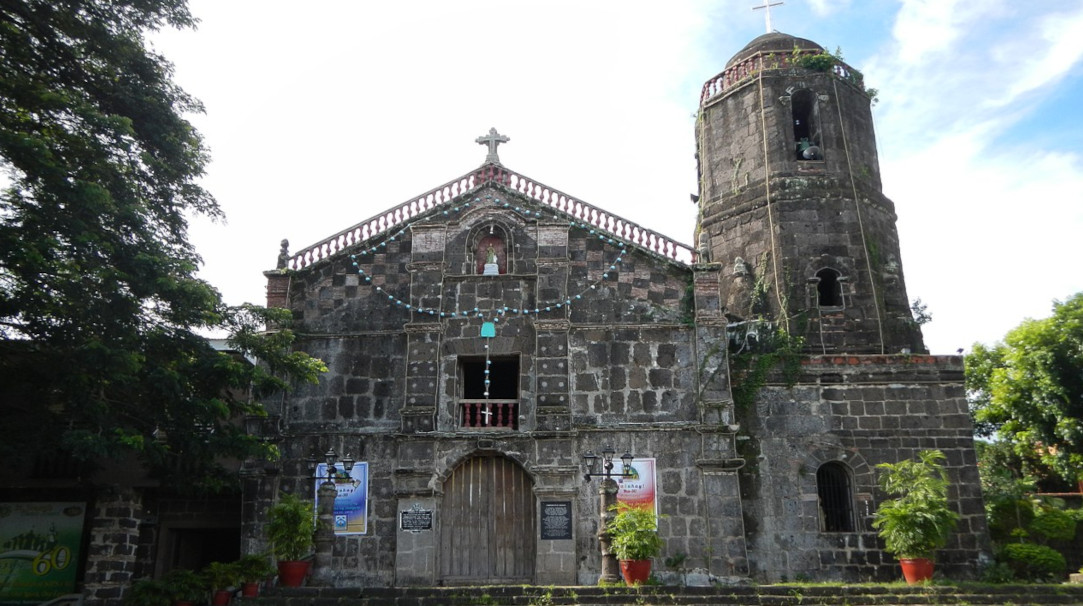 Other names: Diocesan Shrine and Parish of Saint Joseph

The construction of Baras Church started in 1682, right after the town returned to its present site from Ibayo.  Baras Church is of Baroque style and is made with dark adobe stones.  Unlike several other centuries-old churches, Baras Church is simple and unpainted.  The rough walls that have not been plastered are bare and it lacks a ceiling therefore exposing the wooden trusses.  The huge wooden window is positioned at the center of the edifice and stained glass windows illuminate the dark interior of the church.

Despite its roughness and simplicity, the church withstood the test of time and remains a strong symbol of the Catholic faith in town. The church was founded by a Jesuit priest in 1596 but the present church was completed in 1727.  It is made of coral stones with a tiled roof but was replaced with galvanized iron in 1893.  Its facade, also made of stone, has a choir loft which houses an 1824 organ pipe.  The interior is adorned by portraits, murals, and paintings of significant events in the life of Jesus Christ.  It has a pulpit and three retablos which house images of various Catholic saints.

Baclayon Church was heavily damaged during the 2013 earthquake but was completely restored in 2017 and opened to the public in 2018. Completed in 1734, Loboc Church is made of coral stones which is abundant in the area.  It is of Baroque style and follows a cruciform architecture which is common among Christian churches.  Its facade has two levels with pediment and two portico which houses the images of Saint Peter and Saint Paul.  On each side are narrow bell towers.

The ceilings of the church feature paintings and a mural of Our Lady of Guadalupe.  Inside the church are five retablos housing images of several Catholic saints including Saint Peter, Saint Paul, Our lady of Guadalupe, Saint Lucy, and Saint Francis Xavier.  Other structures within the church compound are sacristy, convent, a detached four-storey bell tower, and mortuary chapel.

Like the Baclayon Church, Loboc Church was heavily damaged during the 2013 Bohol earthquake and was closed to the public until May 2021 when restorations were done.

The church can be seen when you cruise the Loboc River. While it is the oldest Roman Catholic church founded in the country, the construction of the present church started in 1735 and completed in 1739.  The church stands on the spot where the image of Santo Niño (Holy Child) was found after a fire was set to raze the village.  The miraculous image is the centerpiece of the church and Cebu’s Sinulog Festival.  This church of Baroque style houses ancient paintings and is adorned with exquisite archways and impressive stained glass windows. Looking from the outside, one will think that there is nothing grand about Betis Church.  But once you get past the carved wooden door, you’ll be greeted by the grandest interior your eyes ever laid upon.  The ceiling is covered in murals and the walls are adorned with Corinthian columns.  The floors are made of thick hardwoods and walking towards the altar feels like you are being transported into the Renaissance period with its carved retablo, several paintings, and images of Catholic saints.  Dubbed as the “Sistine Chapel of the Philippines”, Betis Church is truly one of the most beautiful and grandest churches found in the country.

It was declared a National Cultural Treasure and one of the most popular attractions in Pampanga. Built in 1773, Daraga Church is of Baroque style with a facade and walls made of volcanic rocks which are abundant in the area considering its proximity to Mayon Volcano.  The church was heavily damaged during World War II but has been rehabilitated and is continuously preserved to prevent further deterioration.  Overlooking the sea and Mayon Volcano, the church’s facade, belfry, and baptistry are recognized as National Cultural Treasure.